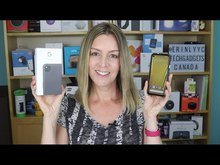 If you’ve been waiting on the newest Google Pixel phone, it’s here!
The newest version, Google Pixel 4a is a little less expensive than other Pixel phones but still features an opulent design; in short it’s designed to be a lot simpler, more affordable ($479CAD), yet highly functional. There’s something about the “A” in Pixels that’s making me start to think it stands for “Affordable.”
Before you get too tempted, it’s worth noting this fall, Google is already teasing two more devices: a 5G option of the Pixel 4a (5G), starting at $679CAD, and a new Pixel 5, also 5G. ready.
VO
Let’s get a look at this new phone…
The Pixel 4a replaces the now discontinued Pixel 4 (the 3a is also still available), but it hangs onto a lot of the features that made the Pixel 4 phone great; though there is some give and take: it’s got a big screen, just a hair smaller than the Pixel 4, albeit in a smaller body.
The matte back looks sexy and the phone definitely looks high end.

Its full HD screen is sharp, and the memory and storage options are nearly the same as the 4. The processor on the 3a is the Qualcomm Snapdragon 730G, compared to the 4’s Snapdragon™ 855. While the Pixel 3a is smaller it boast a a larger battery than the 4: 3140mAh with fast charging, but this version loses Qi wireless charging.

The Pixel 3a now uses a Polycarbonate unibody construction with Corning® Gorilla® Glass 3 cover glass instead of the 4’s soft-touch glass back. There’s a headphone jack in the 4a, like the 3a but the 4 ditched that.

The cameras are basically all the same from the 3a, though the 4 to the 4a: 12.2 MP dual-pixel rear camera and 8 MP wide-angle front camera.

So a bit of back and forth here on the new versus the older models. If there’s a feature you want to make sure you get , you’ll want to run the helpful side-by-side comparison on Google’s website.

Google Pixel 4a case
As before, Google’s washable fabric wrapped confetti cases are available too ($50CAD) The case uses over 70% recycled material, including fabric made from recycled plastic water bottles.

What Are the Features of Google Pixel 4a?
There isn’t much difference between the previous Pixel 4 and the new Pixel 4a besides the processor, the material makeup, battery capacity, and a few other – maybe insignificant – differences.

Google Pixel 4a is one of the very few phones that keep me thinking, “this is cute,” with a handy, lightweight, and attractive design. Even if you have small palms like me, you won’t have any problem handling the phone easily.
The 3a as I noted is made up of polycarbonate material, which is better than glass in case your phone slips from your hands .
Google Pixel 4a also comes with a built-in eSIM for connecting to network providers digitally, a rear fingerprint sensor, a titan M security module, and a 3.5mm headphone jack at the top of the phone.
I’ve always been a fan of the Pixel cameras; they take really great photos in my opinion; and this camera continues to be one of the best available in a smartphone. At this price, if you’re looking for an Android smartphone with a killer camera, you can’t do better than the Pixel 4a.
With the 12.2MP rear and an 8MP selfie camera, plus support for close-ups (though not a dedicated macro mode) you’re still going to get amazing photo and videos.
Battery Performance
Google Pixel 4a’s 3,140mAh non-removable battery is somewhere between “Perfect” and “Just okay.” With regular use, you could scale through a full day, but you’ll need to reach for the charger a couple of times when gaming, streaming music, browsing, or doing other power-consuming activities.
It uses the Adaptive Battery technology that’s common in recent smartphones, which helps alter settings on the phone to prolong the battery life and performance. The 18W fast-charge feature boasts of recouping a whopping 20% in only 15 minutes.
I also like the performance because it provides the details of how much time you have until you reach out to an available charger, unlike most other smartphones that only show you the battery percentage.
Overall review Google Pixel 4a
Overall there’s a lot of great features in the Pixel 4a. It holds onto the best of the Pixel 4, and improves on some aspects like battery. I also like that it’s basically put the full screen size of the 4 into a smaller body so the overall phone is more compact.
Downsides? This phone does feel boxier than some other options out there that have that sleek edge to edge infinity design. But the screen is bright, colourful and does fill the device body.
The camera continues to wow, and it’s easily one of the best smartphone cameras out there with loads of photography features. I guess it doesn’t have a manual mode like some smartphone cameras, another possible downside for some.
I can’t think of any features that this phone feels like it’s missing. And coming in at $479CAD, it’s definitely one of the most affordable smartphones out there.