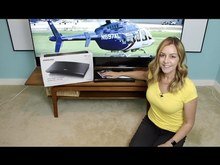 With enhanced 4K resolution, HDR technology for improved colour and light replication plus UHD upscaling to enhance the image quality of standard Blu-ray discs and DVDs, this versatile machine is sure to come in handy for cinephiles.

4K refers to the higher resolution video format also known as Ultra High Definition (UHD), while Blu-ray is the gold standard for video discs today. 4K Blu-ray therefore is the highest quality video you can get in your home theatre today.

This Blu-ray player is very thin but it’s wide. It’s definitely designed to slip under a TV (and it does) but it still seems wider than it needs to be. But that’s just me nitpicking.

The look is sleek and black and it blends in fairly well. The front is even curved to mimic the lines of a curved 4K TV, if that’s your jam. Overall there’s not much to look at, but your Blu-ray player shouldn’t be what’s commanding the attention anyway.

If you’re wondering, there’s no SmartThings control available in this device. Also notable is the lack of voice command, and given that I’ve been finding it in so many gadgets lately, it seems starkly absent here. More so when I need to input my tediously long email addresses and passwords, or type a search into YouTube.

VO
Like most audio-video components today this one comes with streaming built in. Whether you want the primary services like Netflix or YouTube or alternative services like Amazon Prime Video or Crave TV or The Movie Network there’s some decent choice in the app menu.

To get this set up, you’ll need to connect to Wi-Fi, which is easily done the first time you try to access any smart services. Or you can do it via the Settings menu. Once connected you can navigate through the various services.

Streaming works well, but of course you’re totally reliant on your home’s Wi-Fi speed to play stutter free. Luckily for me, my signal is strong and I had no issues, probably thanks to the powerful built-in 1×1 dual-band Wi-Fi which lets you stream data-heavy 4K smoothly.

I have to say I found the web browser pretty unnecessary and clunky. You need to surf it with the remote control’s cursor buttons, then peck out your search using an on screen keyboard (that makes things worse by trying to predict your next key). It’s time consuming and tedious and I can’t imagine anyone actually using it. If it had voice search, maybe. But since it doesn’t I’d never go near this feature again.

When testing a 4K Blu-ray player with a 4K TV it’s tough to know exactly which parts of the video are attributable to the player and which to the TV. I tested this Blu-ray player with a beautiful Samsung QLED TV Q6F 4K smart TV and I don’t know enough about TV engineering to give credit where it might be due.

Suffice to say the overall video quality of this pairing is excellent. It’s crisp, clear, sharp, and vibrantly colourful. The contrast on it was pretty great too, particularly when watching the non-stop explosions in the movie Deepwater Horizon. From the darkest scenes inside the bowels of the ship to the roiling balls of orange crimson flames churning from the wreckage, it was very easy on the eyes and a pleasure to watch.

The biggest downside for most 4K products today is the lack of content being made in 4K. While it’s growing, it’s still way behind what’s being made in HD. If you’re an early adopter of technology this may not be so important to you.

The lack of SmartThings connectivity and voice search was a letdown. These are smart features which I have come to expect in most devices so they feel like a missing piece here.

The web browser is a feature you’ll never use, so don’t factor it in to your buying decision. Use your computer, phone or tablet, or smart digital assistant instead.

Overall however, when it comes to easy set up, operation and video quality, the Samsung BD-M8500 4K Ultra HD Smart Blu-ray Player checks all those important boxes. I can recommend it if you’re looking for a solid Blu-ray player for your new 4K TV.