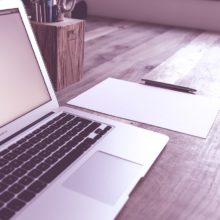 Apple&#8217;s self-driving car project is something of an open secret by this point, and now one of those vehicles has been involved in its first collision.