Inspiration | How do You Get Creatively Inspired? | Lovelite Interview 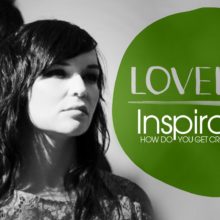 Lovelite is Andrew and Jen Polfer, two worship leaders inspired by the thought of reshaping the mundane, the band’s anthemic, atmospheric style lays a foundation for its heartbeat: to share in the character of God’s creativity.

Check out the full song from Flood Church in San Diego, CA:

Lovelite brings an energetic infusion of euro-pop sensibility and lyrical depth to the congregational worship scene. Led by the husband and wife team of Andrew and Jen Polfer, two worship leaders inspired by the thought of reshaping the mundane, the band’s anthemic, atmospheric style lays a foundation for its heartbeat: to share in the character of God’s creativity.

Lovelite’s proficiency to reflect what they value both sonically and lyrically is illustrated on their latest release, Nearness, an album others have described as “sincere,” “haunting,” and “remarkable.” Fans of Arcade Fire, Radiohead, Doves, Mew, and Peter Gabriel will connect with the project’s lush guitar riffs, rich organ layers, and stunning harmonies.

Andrew and Jen met in High School and began leading worship together at youth group. Soon after the Polfers married, the couple decided to create Lovelite when their collaborative song writing experiments began spreading throughout college campuses and churches in their community. After completing their first independent album, All Color, the duo was approached by Chad Johnson of Come&Live with a wild idea: “give away the album for free.” Inspired by the opportunity to make a bold sacrifice for the sake of God’s kingdom, Lovelite agreed to offer their music as a digital gift. Partnering with Come&Live, Lovelite has given away over 20,000 downloads of their collective albums and songs.

Lovelite has set out to make church music that reaches a generation that is bored with the status quo of worship by launching them into a deeper spiritual conversation with their creator.

According to Andrew, “There are only two eternal things in this world: God and People. Worship is an opportunity for people to creatively relate to a relational creator.”