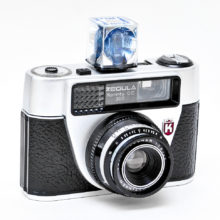 If you bought a Google Pixel 2, you’ll have been disappointed to find that while the headphone jack had gone, Google didn’t see fit to include and USB-C headphones in the box to help you acclimatise to the loss. Yes, there was an adapter, but it was a poor substitute.

With the Google Pixel 3, it looks like the firm might be making amends, if these leaks from Russian tech blogger Канал Лучкова’s are legitimate. Amidst the images of a clean, if somewhat dull-looking handset with an alarmingly prominent notch, we’re shown a picture of white Pixel Buds – only with a wire that the existing product doesn’t possess. Of course, just because they look like Google Pixel Buds, doesn’t mean they’ll be quite the same product we reviewed last year with a cable stuck on.

Yes, they have the same loop to fit in ears, but in all likelihood, the pack-in version will have weaker sound quality and may lack the all-important touch controls – assuming the picture is authentic, of course.

Even if they are full Pixel Buds with a wire, it’s worth remembering we weren’t too impressed with the wireless version. As our review explains, the way they’re stored is awkward, they don’t isolate sound at all, and the touch controls are fiddly.

All this led to a less-than-stellar two-star rating from us, so you have to hope that Google has taken reviewer criticism into account for its second generation. Elsewhere, the leaks seem to confirm what we’ve been reporting for some time on the Pixel 3. The shot above shows key specifications including a Qualcomm Snapdragon 845 processor, 4GB of RAM (the 3.46GB presumably refers to the usable amount) and a 1440 x 2960 display (494 pixels per inch).

Obviously, it’s running Android 9 Pie – it would be pretty weird if Google had opted for Windows 10 this time.

Would bundled Pixel Buds tempt you into buying a Pixel 3? Let us know on Twitter @TrustedReviews.