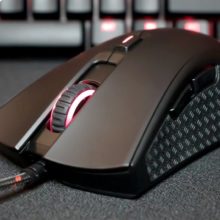 No doubt this sounds great if you’re looking for a large gaming mouse for FPS (and even MOBA), and it is great… with the exception of the sides. It’s not that they’re really bad, it’s just it’s too similar to other mice (like the Razer DeathAdder) to be able to have a design like that.

You could say it’s personal preference and it’s not a deal breaker, but at the same time… the only thing that really separates this from others is how wide it is, and maybe the cost, depending where you’re from.

It’s a great first mouse from HyperX and I look forward to seeing more from them. Buttons, sensor, feel, performance, everything is pretty good. If not for the sides, I would rank this higher. It’s worth checking out anyway!

You can buy using my Amazon Affiliate links here:

If you’re from Australia, I was approved to do this review early, but it should be out sometime in June 2017… when it is, they should be available at mwave.com.au

Want to get into Quake? You can sign up for the Quake Champions BETA here http://quake.bethesda.net/