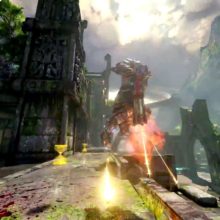 Many of you have been asking my opinion on Quake Champions, so here it is: I don’t know yet, we’ll see! However…

In case it’s not obvious in the footage, I play a lot of Quake Live Clan Arena mode, so the air control of PQL is what I’m talking about in the video. In my opinion, it makes it unbalanced and random. I definitely prefer Vanilla Quake Live.

Otherwise, it looks promising! This video is mainly just some thoughts about it, I might do an in depth analysis of what is shown in the footage if this becomes popular though.