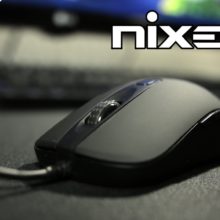 Good, relatively cheap mouse (when it’s $40 on Amazon) with great specs, no software and it performs well. I was a bit worried about the build quality issues people were talking about, but now that I’ve tested one, I’m happy for this to be a top recommendation. Plus I heard their support has been really good, so even if you do get a dud, you should be able to replace it.

Two issues that I didn’t mention in the review (because they might just be on mine):

1. If the mouse isn’t used for a few minutes, it seems to turn the sensor off. It then takes a second for it to start tracking again. It’s like it’s a wireless mouse going on stand by. Never happened in game or in use, just when not using it. Let me know if yours does this too!

These are sometimes available from MWAVE in Australia: https://www.mwave.com.au/searchresult?w=nixeus+revel

And here are the direct Amazon links:

My Amazon Affiliate links (you will be taken to Amazon with these links):