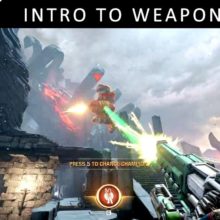 NOTE: I have Bethesda’s permission to upload Quake Champions footage. If you are from Bethesda and have a concern, please contact the community manager for Australia.

This is an introduction to the current weapons of the Quake Champions Beta… they may change later, and we may see weapons like the Grenade Launcher added.

If you’re new to having multiple weapons, you should bind weapons to keys close to your movement keys so you can switch to them easily, even during battle. Rocket Launcher, Lightning Gun and Railgun take priority – make sure you can reach those easiest.

Experiment with weapon combinations and stay tuned for aiming guides in the future.